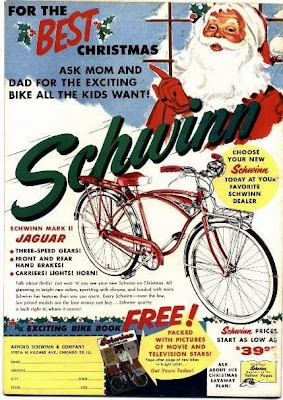 In November 1960, John F. Kennedy won the presidential election. On Christmas morning that year, I woke and ran to the living room to discover my Christmas gifts consisted of a copy of P.T. 109 by John F. Kennedy (Mom had a serious crush on the man), and a Schwinn Jaguar bicycle with double baskets on the rear fender. Black with gleaming chrome, that bike was kind of like dreaming about a Volkswagen Beetle and finding a Lamborghini parked in the driveway.

We were neither rich nor poor. Like most folks, the budget was tight, and though I was in grade school, I understood that new clothes had to last until the approach of the next school year and its accompanying department store sales. Shoes had to be kept polished to help make them last. If I got in a fight and tore my shirt, Mom’s tongue lashing hurt a lot more than any fist. And, I had to stand there while she mended the damage.

The Jaguar, as I called it, was a major purchase. Its presence meant something had been sacrificed so I could have my first, and last, new bike. The baskets represented my future business endeavor. I could now get a paper route, edging out boys who would have to carry those heavy canvas bags. I could offer faster service, resulting in less time spent working, and bigger tips.

The one thing that wasn’t under the tree, or anywhere in the rented house, was Dad, the man who paid the bills. Mom held the home together, maintaining a sense of stability each time we got transferred to a new town, introducing me to new teachers, locating just the right church. Each of my parents had a role to fill, a job to do. Dad’s job meant he wasn’t home—a lot.

He worked for the railroad. His job title was Traveling Engineer, today’s business term equivalent to a district manager. Dad had a large area he was responsible for. Every train, whether operating or down for repairs, was his responsibility.  The NTSB didn’t exist in those days, and it fell to Dad to respond to accident sites, determine the cause of the crash, oversee the clean-up and repairs, and get everything back to normal and operational. If repairmen threw up their hands and claimed an engine couldn’t be fixed, Dad would show up and get it running again. I remember how now and then Mom would get a call from a station foreman announcing that Dad had telegraphed he was on a train that would be passing through the area. We’d quick jump in the car, drive like crazy to some rural crossing (Mom had all the crossing locations memorized), and wave as the train sped past, Dad leaning out a window so we wouldn’t miss him.

And that’s where he was that Christmas, on the job somewhere in South Dakota.

He didn’t get to see my shock and amazement at the prized gift parked next to the tree. But what he did get to see two days later was me on that bike for the first time. Even though the streets had been cleared of snow, I delayed the inaugural ride. He got to see my smile, and I got to see his. Dad’s smile and approval: best belated Christmas gift ever.

By the way, I still have the Jaguar  J