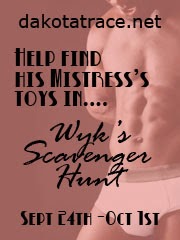 “Whew, these globe hopping visits are a killer.” Traveling from Australia to the UK and back stateside in three days was rough. Stretching, I ushered in Livvy (my muse) and Wyk (the hero).  “For those of you who haven’t figured out what is going on yet, my name is Dakota and I’m hosting a scavenger hunt. Why? Well, because I’m very fortunate–”
“Or unfortunate…” Wyk joked, setting down a plate of homemade chocolate cupcakes.
I shook my head at his antics. “…to have a muse who likes to steal things.  And this time, she swiped a toy bag from Wyk’s Domme and hid all the kinky toys on different blogs.”
Propping her hand on her hip, Livvy gives me her put-out face. “You act like it’s a bad thing? We get to go visiting, talk about Wyk’s Surrender, introduce Mr. Yummy here to the fans, and best of all…” She leans forward to snag a cupcake. “…you bake all these delicioso goodies.”
I want to hang my head when Wyk chuckles.  “You really ought to limit her time with Dora.”
“Why? If it keeps the kids occupied, it works on bratty muses too.” Ignoring my muse’s scowl, I move on. “Anyway – as I was about to say, I’m here today to talk a bit about Wyk’s Surrender and this nifty scavenger hunt we have going on.  Ms. Sticky-fingers hid all the toys on various blogs. So below you should see a nifty little graphic with the toy she stashed here.”
Wyk broke in. “Don’t forget to enter the name of it in the rafflecopter form, because you’ll be entered a chance to win the grand prize.  And for those who collect all eight toys there will be an additional chance to win – a $10 gift card from Amazon! Dakota will be announcing the winners on October 2nd during my Wrap-up party on Facebook.”
I nod. “Yep that’s right. I’ll be on Facebook from 7pm – 9pm CST on Wednesday, talking about the book and characters.  We’ll even have some trivia for door prizes, before I announce the winners.”
“Don’t forget to mention the most important thing, slave.”  Livvy mumbled around a mouthful of cupcake.
“What’s that?”
“The grand prize. How are they going to know what it is if you don’t tell them?”
“Crap.” I grimaced. “Sorry. The grand prize will include a flogger, a pair of pleather cuffs, a sleep mask like Wyk has in the book, and an e-copy of Wyk’s Surrender.” I take a deep breath. “Okay before I leave, I just want to remind you that are only 2 days left to…”
“Aren’t you forgetting something, Dakota?”
I froze at the new female voice.  “Ah, hi Valerie. Is there a problem?”
“The ransom?” She arches a brow at me, before grabbing the plate of cupcakes. “Cough it up.”
Wyk smirks at me. “Better give her the quote.”
Relief washed over me. That I could do. I tugged out the slip of paper. “Here you go. Almost forgot.”
Quote:
“I can’t freakin’ believe I’m doing this.” ~Venus on using 1NS.

She wants to mark him and make him hers…

Mistress “V” lusts after her boss. She wants him at her mercy, begging for her touch, but he only knows her as his very capable assistant Venus. When an off-hand comment dashes her hopes, the sexy domme turns to Madame Eve at 1Night Stand for help…

He isn’t sure he can handle the dark pleasure she promises…
Living up to his father’s expectations has driven Wyk Havas to the edge. His curvaceous assistant Venus wants to push him past those limits, and he’s damn near attracted enough to try. But Venus’s preference for men to submit to her threw him for a loop. Can a date from 1Night Stand show him if he’s able to submit to a woman?


Can Wyk truly surrender to Mistress V’s pleasure or were they doomed from the start?
at 3:00 AM

Thanks for letting me stop by today, Ms. Valerie :D

What an eclectric group of books and authors. Thanks for the fun blog and giveaways.