Happy Release Day to Me---YOU GET THE PRIZE! 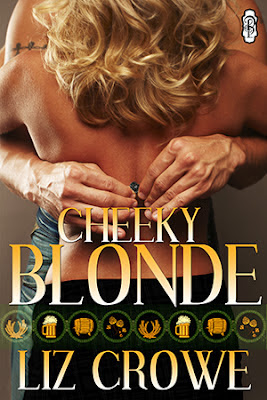 If you are already a Liz Crowe fan you know something about my books. Yes, they contain sizzling intimate moments. Sure, they have characters that sometimes aggravate you, like real people do. You love them and want to smack them at times.  Absolutely, they may not end they way you expect.

But more importantly they are set in places and situations that are outside the norm of many readers’ experience.  No cops, firemen or cowboys (not that these things are bad mind you, I just don’t write them); nary a vamp or shifter (again: see above parenthetical caveat); no royalty, kilts or spaceships grace any of my pages.  What you will find are strong, professional women in businesses like, well, beer brewing.

My newest release today is set completely in the world of brewing, and if I’m not mistaken it is a first for Decadent Publishing.  Cheeky Blonde (the name of an experimental wine barrel aged golden ale) is the story of Jennifer Baxter, part owner and marketing director of a small brewery and how she meets her match/fate in one Sean Garrison. Sean is also in the beer business but at a much higher level, as VP of Marketing for Garrison Brothers Brewing. Both breweries are in Michigan but Jen’s “Brick Street Brewing Co.” is a small operation, focusing on funky, high gravity (i.e. “high alcohol content”), sour, fruity, and generally odd-ball ales.  Garrison Bros. could be compared to Bell’s Brewing in size.  Bell’s makes “Oberon” (a fruity wheat ale) which many of you have access to as it is distributed nationally.  If you don’t know Bell’s then you could think of it as a “Sam Adams” or Boston Brewing Co. size if a bit smaller than that.

These 2 have a lot in common. But Sean is notorious, both as a lady-killer and a cut-throat marketing “savant,” to use Jen’s word.  And when she spots him eyeballing her at a National Beer Fest in Denver at a special release party for Cheeky Blonde one of her first thoughts is that she truly has nothing to say about the guy that doesn’t have “that asshole” automatically in front of his name.

Well, it gets messy on many levels as rumors fly about their “activity” at the beer fest and then when Garrison Bros tries to float a hostile takeover of Jen’s company.

It’s a fun romp in the world of craft microbreweries.  I promise NOT to bore with you details of beer brewing but to add just enough about a very compelling and fast moving industry in the U.S.  to make you want to know more.  Jen and Sean’s story is funny, suspenseful, and full of sexy tension.  I think you’ll love it!

Here is a taste:
Jen spun around. Sean Garrison sat perched on a table, elbows on denim-clad knees. He leveled a stare at her. Air from the downstairs cold storage streamed across the floor between them, chilling her from the ankles up.
She stumbled back, sending a stack of empty stainless steel beer kegs clanging to the floor. Mortified, she jumped from the mess then shuddered when she sensed him close enough to touch her. Shoulders squared, she faced him and choked back the urge to reach out to the man standing within kissing distance, if only to run a fingertip along his just-rolled-out-of-bed stubbled jaw.
“Well, as I live and breathe, Sean Garrison knows who I am, and if I’m not mistaken, has stalked me down to the ladies’ room.” She pulled her hair out of its band and let it flow around her shoulders. “Should I sound an alarm?”
He chuckled, bringing chills to her entire body. She crossed her arms, trying not to clutch at her elbows and give away her anxiety. In one step, he was close enough to put his empty, still-cool glass against the skin of her arm. She flushed, irritated at her reaction to him. She was conscious of his body’s heat, the subtle hint of his cologne tinged with the familiar odors of beer. When she leaned back to look into his eyes, their bright blue depths startled her.
“Oh, um, well, I mean, thanks—you know for the earlier compliment.” She cursed herself.
His other hand traced a line down her arm. She gritted her teeth against the urge to sigh with satisfaction. Someone stomped on the floor above her head and laughter roared through the whole place, a not-so-subtle reminder that a party was going on upstairs. But at this moment, the universe had shrunk to the two of them.
“Sure,” he said, his lips once again too close for comfort. His fingers grazed her skin again, the touch zinging straight to her panties. She’d not had such a reaction to a man in years. She fought the urge to shove him away and run up the steps. Mainly because what she really wanted was for him to keep doing what he was doing.
“No need to be alarmed,” he said, suddenly backing away. “Wanted to make sure I paid my respects to the new queen of beer marketing before you left.”
“I suppose this is where I’m supposed to say something that sucks up to the emperor?”
It took her a minute to realize he was touching her. Again.

Blurb:
Violence, intrigue, and passion are brewing in the craft beer world. When bitter rivals Jennifer Baxter and Sean Garrison meet, the notorious and handsome owner of Garrison Brothers Brewing stays true to form, seducing his rival at a national brewer’s convention.
Sean arrived at the convention expecting to get down to business, including his stated goal of hiring Jen away from Brick Street Brewery. But the beautiful fellow craft beer expert provides more of a distraction than he expected.

When sabotage strikes their fellow breweries, they unite to solve the mysteries. But fate and rumors brew more than beer as love, lust, jealousy, and misunderstanding collide in a way neither could have expected or anticipated.

Can they overcome the malicious chatter long enough to explore the emotion bubbling beneath the surface? Or will lust fall flat and leave them nothing but memories of the moment that slipped away?

ANSWER THIS QUESTION IN A COMMENT AND WIN A COPY OF A LIZ BOOK FROM DECADENT!
What is Brick Street Brewing Company’s brewing focus? (i.e. what sort of beers do they brew?)

all of the ones my hubby would definitely try! Funky, high gravity, sour, fruity odd ball ales....yep he'd be frequenting her establishment lol!

Love the excerpt. Can't wait to read. I also love the cover of the book. Happy release day!

LOL, what a cool name for a drink and a book!

Happy release day. I enjoyed the post and this book looks great.

Thanks for the chance.
Pam
tpibrew@msn.com

This sounds great! Happy release day! Thanks for the chance to win!

Thanks for the chance and Happy Release Day!

Liz, your new release, " Cheeky Blonde" sounds like an excellent Read, definitely one to add to the "to buy list".

I would very much like to be considered in your generous giveaway. Thank You.

"Jen’s “Brick Street Brewing Co.” is a small operation, focusing on funky, high gravity (i.e. “high alcohol content”), sour, fruity, and generally odd-ball ales."
I have no idea what any of this means since I'm not a beer drinker lol. I like whiskey with Coke or Diet Coke. I think that's about my drinking genre. I do like some mixed drinks but for at home party I go Seagrams 7 and Diet Coke lol. Not that I even do that any more lol.

Congrats on the release!! Hides when I admit - I HATE beer. I can't drink it at all - the fruity stuff or not, all awful. I just don't have the taste for it - BUT your book sounds great and that funky, high gravity oddball ale might just be the one to change my mind. The good thing about not liking beer is that husband gets to drink as much as he likes while I drive!