To celebrate the release of my Regency novella:

A Marriage Made in Mayfair
Available June 15 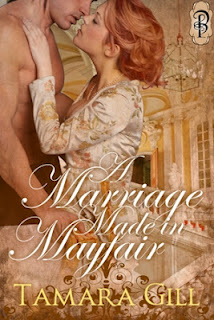 Blurb:
Miss Suzanna March wished for one thing, the elusive, rakish charmer, Lord Danning. But after a frightful first season sees her flee to Paris, such dreams seem impossible. That is until she returns to London, a new woman, and one who will not let the ton's dislike of her stand in her way of gaining what she wants. Revenge on the Lord who gave her the cut direct and perhaps a little flirtation to show the mighty Viscount what he'll never have.

Lord Danning unbeknown to his peers is in financial strife and desperate to marry an heiress. Such luck would have it Miss Suzanna March fits all his credentials and seduction is his plan of action. Yes, the woman who returned from Paris is stronger, defiant, and a little argumentative, but it does not stop Lord Danning finding himself in awe and protective of her.

But will Suzanna fall for such pretty words from a charmer only after one thing. Or will Lord Danning prove to Suzanna and himself that she is more than his ticket out of debtor's prison...

Join me for fun, laughs and prizes.
Every stop I make I'll be gifting a copy of my novella from Amazon.com
(or your preferred e-reader store)

Also everyone who comments throughout the blog hop
will go into the major prize draw.

But what is the prize??? Well, without further ado you'll receive...

Postcard Sets
Romance Trading Cards
$30.00 Amazon Gift Card
Copy of A Marriage Made in Mayfair
And a copy of my two previous works
gifted through Amazon.com
(or your preferred e-reader store)

Interested? Well here are the links and dates of where I'll be:

So come and join in the fun and don't forget to leave your email address for any prizes you may win. I look forward to seeing you soon and good luck!

Congrats on your new release, and all the best with the blog hop! :)