Lucky Guys! Or Not… 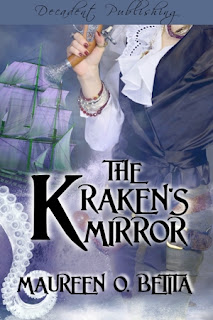 by Maureen O. Betita
I’ve always liked writing characters who are lucky. Though what’s really fun about writing these characters is when they react to the idea that they are lucky…especially the men.
(Okay, some of the guys consider luck their right, when it’s with the ladies…but most of mine resent the idea that any of their success is about luck. We all know what they want it to be about!)
These men want to be known for being clever, sneaky, intelligent. And occasionally treacherous. I mean, they are pirates!
Take Captain Alan Silvestri, the hero of The Kraken’s Mirror. If anyone should know luck, it’s Silvestri. He’s spent 50 years the victim of a good luck curse!
Being the eldest of the lot, he is more likely to accept the concept of luck once his curse has run its course. He’s been around a while and figures that reputation, in the long run, is worth just as much if he’s considered lucky than if he’s considered sneaky. Plus he’d rather not be known as sneaky. (That way it isn’t expected from him and he can get away with it now and then.)
I think this is the sort of viewpoint that comes with age and experience and I find myself supporting this perspective more and more. I mean, I know I’m lucky, but I don’t count on it. I do figure if I leave room for luck it is more likely to visit but if I fluff the pillows and dust the furniture, it might visit more often. (How do I know I’m lucky? Well, when my heart stopped in 2007, my husband was in bed with me instead of still in the shower…and I’d be dead. Luck? You bet!)
Now, Captain Michael March?He’s the swashbuckler from The Chameleon Goggles. Well, he’s younger and he’s cocky. And he’s a bit lazy for the most part. Luck is fine by him. It takes less work. Not that Mick can’t work or be clever, sneaky…etc. (Oddly enough, part of his reputation is for escaping a bad luck curse.) This is a man who uses what comes his way, luck, shipping routes…extra aces…loaded dice…
Hey, Mick is pretty typical of men. And probably the most realistic of every pirate I’ve created.
Wow, that sounded sexist…I’m sure there are women like this! From what I’ve read of Anne Bonny, she knew how to take advantage of what came her way!
Wink, wink! Nudge, nudge!
The last of my heroes from The Kraken’s Caribbean Series isn’t a pirate. In The Pirate Circus,Ben falls in love with a pirate. His difficulty is in believing success isever about luck for pirates. Benjamin Silvestri is a master brewer and he’s very pragmatic. And can be quite judgmental. He’s willing to accept help from his uncle, a pirate, but when it comes to how he views pirates…he’s not so accepting. If only he just believed that it was about luck! But he believes it’s about treachery and being sneaky.
The pirate he falls in love with knows it’s more than luck, but luck plays into it! Janey finally convinces Benjamin that it doesn’t matter what you call it. She is one of the good guys…er…gals.
I know today is considered an unlucky day, but I don’t believe in that sort of omen. Now…horoscopes? Whole different thing! ;-)
How about you? How do you view luck?

Oh what an interesting question. I once said - a lot of luck is involved in getting published - and unleashed an outpouring of fury on the lines of - you make your own luck, if you work hard enough you'll make it in the writing business etc etc. I realised that there might be a difference in attitudes to luck on opposite sides of the big pond. The American dream - hard work will lead to success - is something ingrained into your lives. Of course, we Brits wand hard work to lead to success too but we're far more cynical I think.
So do I believe in luck? Yes, I do. I think chance has us sometimes in the right place at the right time and that might be on the desk of an aquisitions editor who happens to be looking for a story about flying chickens who meet dolphins who can talk.
Am I superstitious? No. I don't care that it's friday the 13th and I don't ever read my horoscope. I'll walk under ladders. I don't worry about black cats etc.
Oh darn it - THAT'S why I never had any luck with the aquisitions editors! I'm going to cross all fingers and toes at once, all day, just in case and touch wood with my head, where's the salt to throw over my shoulder? Panicking now...