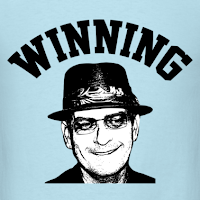 
Yep, I said it. I used a Charlie Sheenism.  You’ve got to admit it’s a cool and catchy statement. Put aside the craziness of the man, he knows how to make a point.  Everyone is enthralled with him, can’t wait to see what he will do next. The crazy blogs, the wild statements, the tiger blood.  Some say it’s just a publicity stunt. Others say he’s addicted to drugs and alcohol. And then there are those who say he has a mental problem. Being Bipolar myself, having two bipolar children, I can say without a doubt that he shows classic signs of being in a manic state.  Did you see the one blog where he’s speaking rapidly, his eyes everywhere but on the screen in front of him. Yep, a sign of bipolar.  Whatever his problem is, he’s the talk of the town. I admit that I’ve been glued to everything and anything that has to do with Charlie Sheen since his crazy attack on the prostitute in his hotel room.  But let’s get back to my point.
Winning!

It’s so catchy. As are his other statements. Ex: …’a total fricking rock star from Mars. I’m an Adonis with Tiger blood in my veins’. He has t-shirt, cups, banners with his trademark, ‘Winning” splashed across the front. Now that is smart. Word is he’s in the works to produce a soft drink called, ‘Tiger Blood’  So I was thinking. What does it take to get your word out, to have the readers notice you? Have you ever read a book where one phrase has popped out at you and stuck with you? Have you ever used a phrase or word that your readers have commented about and loved?  What does it take to get noticed in such a huge ocean of authors. Well, I certainly am not shaving my head like Brittney Spears did, or phone my husband and rant and rave about wanting him dead like Mel Gibson did. So what else can a person do?

Do you think I would be taken in and placed in a straight jacket, locked in a white padded room if I stood on the top of a building and started throwing my books at people who passed by? Um…okay, a tad bit dangerous, so maybe not. What if I dressed like a vampire, parading up and down the street with a sign stating,  “The Darkness is Coming” hoping someone will buy my Darkness Series. Or maybe I could change the entrance sign into the city I live in to “Passion” in honor of my Passion series. How long do you think it would take before I was hauled in and locked up? LOL
Maybe going to such extremes is a bit too much. Perhaps I should stick to the basics, blogging, twittering, posting on Facebook, placing ads in RT mag to get my books noticed. I don’t think I would look good in stripes being Big Bertha’s bitch, and I know having my arms wrapped tightly against my body is sooo not appealing. But still…the urge to come up with a catchy phrase and have everyone following my every word is tempting.
Duh! Winning!
What do you think? Do you think catch phrases work in books as well as they do on TV, movies and from Celebs? Do you have some catchy ones that have stuck with you? Have you written any? I want to hear your opinion. I can’t be the only one out there who has thought about streaking down the street with the title of my soon to be released book, ‘Awaken the Demon” etched in red paint across my body. Am I??

Wearing a pirate hat of somesort everyday at RT...

I was thinking of going to the Northern California Pirate Festival hauling a basket of buttons... I'm taking buttons and bookmarks to BayCon in May...Moonlight and Magnolias in September... Pushing for a spot on a panel at SteamCon III. Sending buttons to the Nationals with my agent.

And I'm considering a campaign to convince Kraken Rum to sponsor me...

I agree that experience makes the best adventures. Let's do a publicity stunt! Seriously. All it takes for me is a bit of liquid courage, and I'm game for whatever. Hmm....what to do, what to do...

I love this post, Shiela!!! A rant or bizarre event does boost a career, even if some feel in a negative way. I think a catch phrase can boost a novel to becoming a household word.

I adore Scarlett O'hara's lines, "I'll think about it tomorrow". "After all tomorrow is another day." from Gone With the Wind.

My phrase is, "The way to your destiny is to follow your heart."

Hmmmm. I don't necessarily have a catch phrase, but certain things do cath my eye. I love the saying on Deanna Wadsworth's page, "It's only kinky the first time you do it", or something to that effect. Whatever you do , though, you have to have the balls to follow through with it. ( Feed Leslie some liquor and she'll do it for you! Ha! Just kidding dear! Well, Pretty much!)
And, I have to admit, I don't like all the Chalie Sheen ruckus, but he has carved out a slot for himself.
If you paint yourself red, I promise I'll support you!

Leslie...doesn't Sacramento have a pirate festival?

Can I lose enough weight and hit the gym everyday so that red body paint won't send any potential fans running???

Off hand, I can't think of many literary catch phrases that really stuck in my mind. When I was a kid, I recall always quoting LOTR and The Hobbit. The only two that come to mind now are: "Stupid, stupid, rat creatures!" (Bone by Jeff Smith) and "Riddikulus!" (Harry Potter). Most of my borrowed catch phrases come from movies and TV.

I have a flashy dog that everyone wants to stop and meet (white and black greyhound). There are days when I think I need to stick some book related advertisement on him.

Pat, get him a little cloth saddle bag that say, "My mom writes books! Ask her about them!" And load it with some pockets filled with bookmarks.

Y'know, at this point I think there's very little I would hesitate about due to embarassment, but breaking the law sets a bad example for my students. Beyond that, I think you guys realize there's not much I'm going to shy away from, and with a touch of rye in me, that drops to 'nada'.

As for catch phrases, I'm fond of dog latin, like the slogan on my blog ('Finis vitae sed non finis amoris', which translates to 'The end of life is not the end of love')

As for catch phrases from books, they tend to be memetic mutations of ideas from the books, like the "Frodo Lives" meme from the 70's. I've heard lines and ideas I relly liked, but... They tend to not be 'catchy'; they take too much to understand. It's rare to find a well written book with really cool ideas that *also* has sound-bite-worthy lines. I'm going through the ones I know, and each and every one of the Crowning Moments of Awesome requires the book to set it up.

I mean, there *are* some writers I read and like who have catchphrases that are part of the prose they write, like Christopher Moore and "Fucksocks". But most of them don't do that.

I'm trying to think of really clever ones from what *I've* written. The closest is, um... Maybe "Be good baby, Momma's coming." from The Strange Fate of Capricious Jones... Or maybe "Fetch!" from Crowbar Girl. Really, if you want catchy, you need stuff that goes on a TShirt.

I love writing catch phrases. From my cozy mystery: "like now". These two words were to be added to the end of any sentence.
As for throwing my book at people..hmmm. I won't deny it is temping. However, some wise author said something to the effect of, "Books are like bread crumbs, the chances of being found increase in ration to the more you scatter." (When I write scatter you read write.) Tried to be clever--came up with confusing.

How about 'Frankie says RELAX!' :)

LOVE this! You are saying just what I've said about Charlie. I do not think he's high on drugs, more high on attention. And, considering that he's a very intelligent, very creative individual who has been haunted by the media his whole life, I think he is quite possible a manic who is just saying EFF IT and using it to his advantage for once. He has been in Hollywood his WHOLE life, the man KNOWS what he is doing.

That said, I hope all of his children (he has one that is in the mid-20's range besides the broods with his 2 recent ex-wives) are either being sheltered from the fray or being educated by it. As what NOT to do when you have kids! :-/ However, like Tommy Lee once said, it's not like the kids would have a normal upbringing anyway with the parents they were gifted with.

I am so sorry for being late to respond to all the wonderful posts. I'm currently out of town and only got to my emails today. And wow!! Thanks so much to everyone who posted.

I hear Charlie is not doing so well in his live shows, but then again, is this a big surprise. He pretty much rants about his life for two hours.
I feel for his kids too. What a life to have with a man like Charlie. We never hear from his 20 year old other than Charlie came to rescue when the paparazzi began chasing her because of his resent rants. I thought it was sweet of him to come to her resue and it was so nice to see him as a "real" dad. He asked the paparazzi to please leave her alone, that she has nothing to do with his lifestyle. Bravo Charlie for finally showing that you are kind man.
As for catch phrases, not many in books, but I do love when authors add a little tagline to their books. Like for instance, for my first book (no longer under contract) Kidnapped, I used the tagline "Abduction with Seduction" It was a huge hit. :)

Really clever ones will make me stop and take a second look!