What's In a Pen Name?

Shakespeare wrote, ‘What’s in a name? That which we call a rose by any other name would smell as sweet.’ ~Romeo & Juliet
Okay, that’s my lesson in classics for today, but now you’re wondering how that relates to this blog.
Well, if you’ve been reading my Wild Wednesdays for awhile, you’re already sure they’ll be some silly spin on the Bard’s words.
I guess one of the reasons I write is that it’s a ‘socially acceptable form of schizophrenia.’ That excellent thought came from my local writers group blog ---thanks for the line Kristi!
And, if you’re me, because of my years in radio and now writing, I have had SEVEN – count’em! – SEVEN names in the past thirty years. (and, I’ve only been married once!) With all those names and personalities, it’s no wonder I write! 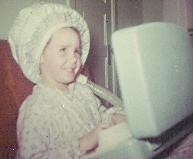 I was born Wendy H****n, a name which was pretty darn good for a long time.
Radio is my first love – it’s in my veins and is one thing I know I do well. While in college at the University of Wisconsin Oshkosh, I got my feet wet in the business doing a couple of shifts a week at SUPERHIT 97!  The program director there had a specific ‘feel’ he wanted in all the jocks’ names – where he came up with Bobbi Shasta I have no idea, but if I ever decide to write full-blown-hard-core erotica –I’m sure Bobbi will return.
My first fulltime job in radio after college was in Iowa, where no one really knew the name H****n, and because I wanted to remain ‘anonymous’ outside my on-air job, my program director gave me a list of names he thought was acceptable and Wendy Warden was born.
I bugged out of Iowa after awhile and took a job I didn’t really care for in the nederlands of north central Wisconsin – I was Wendy Collins on an FM station for a week.
I moved to Toledo for a new job not long after. Wanting to forget my time in Iowa (sorry, if there are any Hawkeyes out there!), Wendy Warden was out and realizing Wendy Collins never really ‘worked,’ I went for another name change. Wendy S******n  – in honor of my preschool in my hometown. My new program director tapped me on each shoulder with a microphone while drinking a giant margarita at a local Mexican restaurant and such was I dubbed. (Thanks Gary!)
I still use that name in my current job behind the scenes in TV. Heck, I was on the air in Toledo for eleven years as Wendy S******n, people knew the name, so I was ‘in the door’ from the get-go making contacts and getting information.
I got married in between and Wendy H***n became Wendy G*****.
Then, publication presented itself. Hmmm….I didn’t want to go by my given name. I didn’t want to use my ‘working’ name – it’s linked to a certain business and professionalism. If I wrote something a bit ‘too spicy’ for some, I’d rather not have my married name linked to it. (I’d never hear the end of it if my huz was razzed by his golf-league pals!) Shasta was already taken should I have a foray into XXXX erotica. Collins didn’t work for the purpose at hand. Warden lived in the ‘bad memory’ box in my mind, so that was out.
So, I needed a new name – a pen name.
Well, my dear pal and fellow-DP author, Deanna Wadsworth of RED RIDING HOOD, SLEEPY HOLLOW and SECRET SANTA fame, and I were having a few adult beverages (i.e. barley pop) and conversing about names.

“You need to keep ‘Wendy,’” she said. “There aren’t a lot of ‘Wendys.’”
Okay, I agree and I do like my first name.
We bantered about possibilities. Then I remembered a name I liked and had used in a story I was working on, which took a completely different turn. (…as an FYI, the character wasn’t actually a long-lost princess of the Burke clan in Ireland…) …so I took that character’s last name and Wendy Burke came into the world.
So, now Burke better produce results! And, if she doesn’t, well, I guess I could sell my name list to some black-ops CIA group as alternate identities or maybe to an author who spins such yarns.
Hmmm, I wonder if Brad Thor would consider using any of them?

Wendy Burke blogs regularly for A Daily Dose of Decadence and is dangerously close to getting RESPITE, a post-WWII romance published by Decadent Publishing. She can be found on Facebook – Wendy Burke Author, at her blog site, Whatever Wendy! (www.whateverwendy.blogspot.com)and lurking around the Internet.  When not playing with the people in her head, Wendy has a fine life with her handsome chef husband (no, her married name is not RAMSEY) and two furry feline kids. She also has a full-time job behind the scenes in television which keeps her from writing fulltime in the somewhat pot-hole-free suburbs of Toledo, Ohio.
at 12:01 AM

I think my head fell off somewhere back in Iowa...

Wow, I can't imagine carting around all those names!

Wow. Thatsalotta names! I've only had two last names: the one I was born with and the one I have now.

I've had people get confused and decide my first name was something other than Pat or Patricia. Since, A) I don't like my first name and B) didn't have the heart to tell 'em they were wrong, I cheerfully answered to my "new" name.

The gremlins have been busy again! I hope you all can figure out the links!

I can understand why you would want to use a pen name. Especially when your in a certain profession. As for me, I use my real name. I thought about a pen name, and even picked one out. Maybe some day, I'll use it.

Given the fact I teach kids, I wanted to keep my writing from getting intotheir grubby hands, so a pen name seemed appropriate. Well, now my students' parents want my book. There goes anonymity. But that's okay, I like these parents. :)