I'm thankful for my awesome mom, who besides being my biggest fan (and Internet stalker), is the reason I grew up "horsey."
Although El Paso has sometimes been called a cow town, there's nothing particularly agricultural about it. At least, not unless you can round up tumbleweeds and dust. I grew up in a lower-middle class, Hispanic neighborhood, where the closest thing to livestock were large stray dogs.
But for some reason, my mom got it in her head that I should have riding lessons.  At the time, however, she was struggling to make ends meet on a secretary's salary.  (Unfortunately, a degree from Tulane in classical languages didn't equal "highly employable.")
She found a riding stable on the outskirts of town and every weekend, starting when I was about seven, she schlepped me out for my riding lesson.  Eventually, she started taking lessons as well.  When the stable closed, she bought our two favorite horses--Happy and Red--saving them from the slaughter house.

The common misconception about the horsey set is that we're wealthy. No, you won't find any horse owners among the urban poor. But horse crazy is an affliction that strikes all incomes, including the lower middle class.
My mom's decision to get me riding lessons was probably driven by her own horse mania. But her addiction, and mine, would produce some of the best memories of my childhood and youth. Thanks, Mom!
***
It's almost spring, the time when a young, er, youngish, er...crap....when a woman's thoughts turn to gardening.  This woman anyway.
Writers often say they have to write. I have to garden. It's a fearsome compulsion that's nearly the end of me every winter. 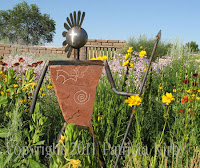 "Sticks!" I wail to my long suffering husband. "My garden is nothing but sticks."
"Here," he says, handing me the Xbox controller, "Kill something. It'll make you feel better."
Legions of zombies and purple-blooded aliens fall, but it's little comfort for the barren wasteland that is my garden. I gnaw my fingernails and stare out the window, twitching with the need for the smell of earth.
Then one day I hear it. A thrasher is singing in the cholla. Thrashers, the desert cousins of the mockingbird, are a menace as they tear up the garden in search of bugs.  But I suffer them for their lovely song that announces spring.
Before long, I'm in the hardware store, buying more little envelopes of seeds than I can ever plant. Some women buy shoes and sneak them past their unsuspecting partner.  Me, I buy plants.
"I don't remember that," says my husband, frowning at blue spray of flowers that spills over a pot.
"It, uh, came up from seed," I say.  Yeah.  Seed sprouted in a nursery in some far flung nursery in New Jersey.
Though sticks still outnumber green now, by summer my garden will be a riot of color and life.
***
I got a powerful thirst for musical libations.
Eons ago, in the 80s, the only source of music in my dusty corner of West Texas was the radio. At least, the only easily accessible music. My musical palette was limited to a couple of pop and rock stations, some country, and because it was a border town, loads of mariachi stations.  All playing the same limited playlist. No indie labels.  No folk, dance, electronica, world, punk, alt-country or alt-rock, etc.
The musical landscape of my teens was as barren as the moon.
Until CDs came along, another serious downer was the cassette tape. I have a habit of listening to my favorite songs over and ov-ah, until the song is etched into my wee brain.  Cassette tapes don't stand up well to repeated rewinding.
This musicphile loves MP3s, Internet and satellite radio, iTunes and *Pinky, my iPod
Thanks to sweet, sweet technology, I have a way to slake my thirst. At the click of a mouse, I have arrayed before me the vast panoply of musical expression. With Pinky, I can listen to a song until my ears bleed.
(*My husband thought it would be cute to buy his tomboy wife a pink iPod. One of these days, I'm painting it black, with little skulls.)
Happy Thursday! What are you thankful, thoughtful and thirsty for?

I have a gold ipod...my own gold doubloon!

Love the story about how your Mom made the horse thing happen. Nothing like a determined Mom!

Hey Pat,
I am thankful there are others out there just like me in one way, shape or form. I love music! All kinds! I'm thinking about what I shall do over Spring Break. I thirst for a life of decadence! Man am I dehydrated! lol

@Maureen. A gold iPod...how cool is that? I don't know how my mom managed the horse thing, but I'm sure glad she did.

@Deena. Music is my muse.
Hope you get to do something wonderfully decadent over your spring break! :)

A mother will stop at nothing to make her child happy. Your mom gave you a wonderful gift.

My husband shares your passion for gardening. He creates a masterpiece each year. He loves playing in the dirt. As for me, I like looking at it.

I have an electric blueish purple iPod and a neon pink MP3. lol

I love this, Pat. So funny. Thanks.
Heather

@Kathleen. Moms rock!
The garden dynamic is the opposite in my household. I play in the dirt; my husbands sits on the bench and enjoys the view.

@Heather. Back when my husband bought my iPod, they only had three colors. Then the new version came out with my favorite color--purple. You're luuucky. :)

Hehehehe Pat, I know exactly what you mean about the horsey set. We're rich in terms of experiences we have, and poor in a monetary sense.
We'd feed the horse before we feed ourselves, if it came to it.
Happy to see another horsey person around.
I love a particular quote by Winston Churchill: "The outside of a horse is good for the inside of a man." (or woman.)
He's right.
As for gardening, well. I've been trying to kill an oleander for the past 17 years. It's not working.
Then someone said "Could you give me a cutting?" and instead of giving her the one I'm trying to kill, I made a cutting.
I now have two oleanders I'm trying to kill, because she never picked the darn thing up.
I managed to kill a fully grown basil plant in two days flat last week. I guess it was a teeny bit too cold when I stuck it outside the door. *eyes the wilted brown stalks and leaves*
Ooops.

@Silke.
"We're rich in terms of experiences we have, and poor in a monetary sense."

I love that! Wonderful.

Oleanders are like the Wolverines (X-Men) of the plant world. Tough-as-nails, survive anything.