How to Speak Sheboyganese - Part II 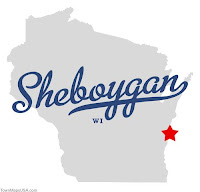 Well, fellow linguists, if you remember my blog from last week, you learned the finesse of the Sheboyganese accent. For those of you who didn’t read A Daily Dose of Decadence last Wednesday – first of all SHAME ON YOU!  J  Secondly – go back and read it as it is a prerequisite for SHEBOYGANESE II at the University of Wendy.
Just to reiterate, Sheboygan, Wisconsin is my hometown – I was born and bred there. It’s a beautiful town of 50,000+ on the shores of Lake Michigan half-way between Milwaukee and Green Bay. From last week’s lesson we learned, Sheboyganites have a particular accent, so specific that other Wisconsinites can tell if a person is from Sheboygan.
But, along with the patterns of speech you can hear from someone from my hometown, there are also words unique to that county.
I had never grilled anything until I moved to Ohio. Whatever is done on a contraption fueled by charcoal or propane was called frying in Sheboygan. In addition, no respected Sheboyganite would use propane (well, not in my day!) to fry anything! We used charcoal – chunks or briquettes – soaked with starter fluid. (Or white gas if you were my neighbors, the Holler family! Love you guys!) 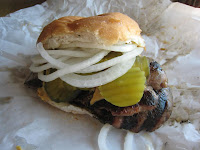 But why?...you ask! Because charcoal is a tasty substance in which to drop meat. Hell, I can’t tell you the number of blackened – and I don’t mean Emeril Lagasse-ized – bratwurst I have consumed in my life which I picked directly out of the glowing embers of the fryer (more on that word in a moment.) Just wash it off in a little butter-onion-beer juice simmering atop said fryer and you’re good to go! In the photo you will see the perfect double brat – served on a Sheboygan hardroll with brown mustard, dill slices and onion! Man, I haven’t had a really good one in some time! Wash it down with a lukewarm Kingsbury and you’re nearly in Cheesehead nirvana!

Now you know we fry things in Sheboygan and not grill them. Well, the item full of charcoal on which the frying takes place is one of two apparatus – either a fryer or a Weber.

A fryer is nothing special, just a round, flat-bottomed receptacle on legs, covered with a ‘grill.’ 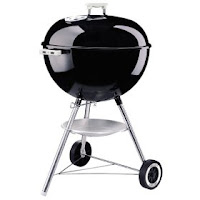 As opposed to the fancier, Weber Cooker.
Now you might not say there is a difference, but growing up in the Bratwurst Capital of the World, I can assure you there is – some families even had a fryer and a Weber!
And, remember – the above fryer should also not be confused with the fryer  you can get in the meat department at your local supermarket…like The Pig in Sheboygan. If you’re still confused, that fryer would be a nice chicken for frying. (In a pan or on the fryer.)

Have I lost you yet?  Just two more and you can go shopping in Sheboygan!

When perusing the frozen treat section of The Pig (see above), don’t forget on a hot summer day, coolers are great eating. Now, you’re saying, why would I eat something that keeps food cold! Well, you’re not…in Sheboygan a cooler is a cold food – namely a Popsicle.

And if you need some quick hydration…stop at a bubbler and take a nice long refreshing drink. It’s a water fountain.
So there you have it – you can now sound and speak like a Sheboyganite!
So much easier than advanced Latin, huh?
Wendy Burke blogs regularly for A Daily Dose of Decadence and is currently in the editing process on RESPITE, a post-WWII romance to be published soon by Decadent Publishing. She can be found on Facebook – Wendy Burke Author, at her blog site, Whatever Wendy! and lurking around the Internet – usually giving Deanna Wadsworth (http://deannawadsworth.blogspot.com) a load of crap because she truly deserves it. When not playing with the people in her head, Wendy has a fine life with a chef husband (YES – no cooking!) and two furry feline kids and a full-time job that keeps her from writing fulltime in ‘beautiful’ Toledo, Ohio. Right now, however, she’s having a helluva hankering for a double brat!

OK, seriously, Sheb. was a totally different planet than whereI grew up and hour+ away. lol

We grilled or BBQ'd. And we ate Popsicles. But my favorite was the Push-up!

Can I load my bubbler with whatever I want? I like the idea of drinking rum out of the bubbler...

LOL, I was confused there for a second, Wen! So you buy fryers and coolers at The Pig, fry fryers on the Weber and drink out of a bubbler. Does that sum it up?

Damn, I haven't heard anyone call a water fountain a bubbler since I moved from WI to IL back in 1968.

I wonder if Milwaukee still has bubblers on the street corners.

Brill, I love it -- bubblers, that's what they call them in Aus and it's stuck. So when we call them bubblers, we do get strange looks. but then again, we say a lot of stuff that grants us strange looks.
Ice lollies, not Popsicles. BBQ not grill or fryer.
heck, I could go on..and sometimes I have to, to get my point across LMAO

First time buying plasters was fun _ NOT_ sorry, plasters are band aids. The lass behind the counter had no idea what a plaster was, so I then went on to say Band Aids..but because of my accent, she was still lost. We laughed all the way home!

Thanks for educating us on the Sheboyganese accent. If I visit Michigan, I can take a drink from a fountain, while licking a cooler, and then cook my hamburger outside on a fryer. Sounds like fun!

We are headed for Sheboygan this weekend... wouldn't it be a kick if, because of my education at the U of Wen, I were to be thought a local? I'd love to run right out and eat a double-brat for you, but I think wings are on the menu for Daytona-Fest. Catch you in S.B. for piah! J&B