1. Where do you dream of traveling to and why?

We used to travel a lot. In fact, every bit of spare time and spare money was spent travelling. We’ve been around much of Africa, India, South East Asia. Now we’ve settled down on an almond farm on the mountains of Southern Spain and we don’t get to travel much anymore - a combination of too little money and too many animals (three dogs, three cats, two goats, a horse and a handful of chickens!). But there are still places I’d love to visit—I want to go horse-riding up the Inca trails in South America, and canoeing down the Amazon, and I’d love to go to Egypt and visit the pyramids and…. Oh dear—I think I’m getting restless.

My current release is Mid-Winter Magic. It’s part of an anthology of stories put together by my fantastic critique group, Passionate Critters. There are four stories in all, which range from contemporary to paranormal, but all romance, and all set around the fictional American town of Five Oaks. Mine involves a really hot vampire and the witch he’s been hunting for the last fifty years.

I used to write more short stories, which weren’t necessarily romance, and he’d read and comment on them for me. Now, I mainly concentrate on longer romance. It’s not his sort of thing, especially the vampires and werewolves, so I keep it to myself. Besides, it’s probably best he doesn’t really know how my mind works.

Yes, I use a pen name, mainly because I didn’t think my own name sounded particularly authorly. Of course, I hadn’t actually chosen one when I made my first sale, so it was done in a bit of a rush. I looked up name sites on the internet, and I was totally overwhelmed. I couldn’t decide, so in the end I narrowed the choices down by sticking with my own initials. And I wanted something short and catchy so came up with Nina Croft.

I think probably The Lord of the Rings. It’s just so big, in every sense.

I’m a relative beginner, so I’m still working out what works best for me. I don’t use a set formula. I hate routines, and I tend to vary the way I do things each time But I am a big fan of how to write books, and if I get stuck on a plot, I’ll often go off and reread one of my favorites, and try some techniques from that.

7. What question do you wish was on the list? Your answer?

Name ten things to do with almonds.

Living on an almond farm, I’m surrounded by nuts, so I think about this a lot. Sadly, the 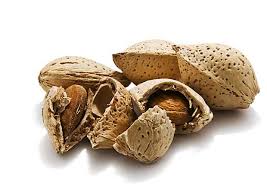 question never seems to come up in interviews.

Anyway, here goes—roast them, salt them, blanch them, slither or grind them. Make turron, marzipan, almond oil, sprinkle them on curries and cakes and crumbles. I think that might be eleven!

Can we cover them in chocolate after we roast them?

I love almonds! And I'm very jealous you've traveled so much!

You forgot "Make Amaretto" :P
You would love Egypt. I've not been to the pyramids, but it's on my list. I've only been to Dahab, but I really liked it.
Now I have itchy feet!

I'm curious - how self sufficient are you? Do you use goat's milk to drink, or to make cheese? And do you grow the almonds commercially and sell them?

Hi Clarissa - glad to hear you like almonds - must send you some - maybe after I've covered them in chocolate!

Hmmm Silke - Amaretto - do you have a recipe???

Tatiana - we're not that self-sufficient. We grow a lot of our own fruit and vegetables, and we used to make wine (but ended up drinking way too much!), but as to goats milk - there's a problem in that you have to get the goats pregnant each year and I don't want any more goats (they're horrible animals v. closely related to Satan). We did it once - had a baby billy goat - we even called him barbecue to remind us what we should do with him. But I found I was incapable of even considering eating something I'd been present at the birth of so we ended up giving him away and I decided never again!
As to the nuts - they are supposed to be commercial but the price has dropped so low over the last few years that it's not really viable. It's sad - a whole way of life here is vanishing.

If you're a newbie writer, I'm going to toss in my chips, chica. Your books are phenomenal! Original, well-written, compelling--I could go on but people will think you paid me. ;)
You're a fantastic writer and I love your books!

As for almonds--did you know a handful of almonds contains all the vitamin e an adult requires in a day? It's a new, favorite snack in our house.

I wonder if we've eaten almonds grown on your farm? :)

Cynthia - I think I love you! And of course I'm not paying you (how many almonds did we agree on???) But yes - I think I'm relatively new - at least I'm still at the stage where I try new things and haven't quite worked out what's best for me yet.
As for eating almonds from my farm- sadly, I doubt it - they grow loads of almonds in California and much cheaper than here - mainly because we're up a mountain and everything is so hard (and expensive) to do!

Eating almonds when you're dieting will help you lose more weight than if you don't. http://health.learninginfo.org/almond-facts.htm

And yep, I agree, goats are interesting animals but I couldn't eat Barbeque either. The only meat I'll eat comes from the grocery, not my barn. LOL

And what does "slither" mean, in relation to almonds?

Great inteview, Nina. I enjoyed learning more about you. My husband really doesn't read my work either. I laughed when you mentioned not wanting him to see how your mind works. I feel the same way. lol

I love anything with almonds. Yummy!

Now my husband, he adores that almond paste stuff...

HA! My mother-in-law raised meat goats...to sell for slaughter. She's there to help birth them, the whole nine yards and sends them away while cashing the check. Different mentality than I would be capable of!

And sadly, you're right. California is a big almond grower. I've eaten a great deal of them...

Hi Nina,
Never knew so much about almonds, but I do eat them on a daily basis. I've heard before goats aren't everyone's favorite animal. Enjoyed your interview, can't wait to read the anthology.

I think it's cool that the Lord of the Rings insired you. And I've never given much thought to almonds, but now you've given me some interesting ideas! (and made me hungry...LOL)

Valerie - is that true about eating almonds and losing weight - the diet starts tomorrow - this is valuable information. And slithering is sort of slicing really thin (at least that's what I do when a recipe calls for slithered almonds!)

Kathleen - yes definitely some things are best kept under the 'being mysterious' header.

Maureen - We have a shepherd lives just across the road (which is where my goats came from - abandoned babies - I couldn't leave them to die!) He raises them for meat but I just couldn't do it - like eating your friends.

Yes Kit - goats are a nightmare - I once swore I would never have another - but see the abandoned baby comment - what could I do?

Debora - I have to admit, I never gave much thought to almonds before I moved here - now they're everywhere!

I LOVE almonds! Chocolate covered, toasted and sprinkled on green beans or desserts, sliced and on my salads...yum!

And I agree with Cyn...you're an awesome writer and nowhere near newbie status.

Wonderful interview, Nina. And I think more interviews should feature questions about almonds.

((( Maureen))) FANTASTIC IDEA! Yummmmmmmm chocolate covered almonds. Now that is a slice of decadence right there :)

Nina, what's life like in Spain? Do the locals speak English? Do you manage to get your hands on foods you enjoy, or is the cuisine quite different there?

Hope you get the funds so you can let your restless feet wander where they desire to go!

I am fascinated by where you live. To me it sounds exotic! Does it sound exotic to you? I love almonds any way shape or form. I especially love them drenched in chocolate.

Thanks Chelle - you're a sweetie!

Jo-Anne - mostly I love life here. Unfortunately, the locals speak absolutely no English (which isn't normal for Spain but we are very remote) and my Spanish is awful even after so many years (mainly because I'm almost a hermit and I never go out!). Most English foods you can get in the big supermarkets on the coast (where there are lots of English people) but I haven't found a fish n chip shop yet!

You know, I forgot to add something.
Maybe in another blog some time :P

But if anyone browses...

If you have brittle fingernails and you've tried all those cremes and potions and pills...
Eat a few almonds every day. 4-5 are enough. Watch your nails improve.
(Not inside of a week, but keep it up a month and you'll probably see a vast improvement.)

Actually Silke - my nails are pretty strong - I use them for grooming the horse - maybe that's why!