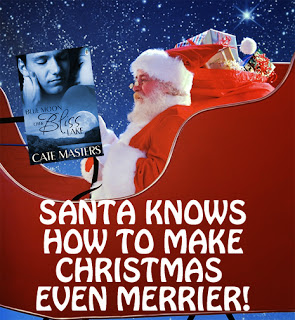 Santa couldn’t have given me a better present than Decadent Publishing did this year – the release of my holiday novella, Blue Moon Over Bliss Lake!

I may have to croon Blue Christmas for days! But in a joyful rather than melancholy way. Blue moons bring luck! And to me, symbolize second chances. I couldn’t resist playing with that particular idea in this story. And if you love the movie Serendipity, you’re bound to love Blue Moon Over Bliss Lake, too – both have slight touches of magic only found during this season. Combine that with two hearts who’ve yearned for each other for a long time, and it only adds to the magic of the story.

Blue Moon Over Bliss Lake launches a new series, a bit different from most other series in that it’s linked by title. The characters don’t repeat, but they’re some of the best characters I’ve written so far, I think. They really pop off the page to life. I hope you’ll agree!

I hope Santa does too! He seems to be enjoying his copy, doesn’t he?

Do holiday stories help put you in the spirit? However you celebrate, I hope you’ll have a wonderful and joyous one.

Here’s a peek at Blue Moon Over Bliss Lake:

Can Fate give two people a second chance at love? Sierra O’Brien and Carter Grove are about to find out. After an accidental meeting near their hometown of Bliss, Pennsylvania, events from their past reoccur. Will they make the same mistakes and drift apart again?

In Bliss, the inexplicable is an everyday occurrence, and anything is possible—especially during a blue moon.

Cate Masters has made beautiful central Pennsylvania her home, but she’ll always be a Jersey girl at heart. When not spending time with her dear hubby, she can be found in her lair, concocting a magical brew of contemporary, historical, and fantasy/paranormal stories with her cat Chairman Maiow and dog Lily as company. Look for her at http://catemasters.blogspot.com and in strange nooks and far-flung corners of the web.
Cate loves to hear from readers! Email her at: cate.masters@gmail.com

Catch up to Cate

You got a great Christmas present this year, Cate!

What a great trailer! The music and the pictures really catch the viewer's attention.
Awesome Christmas treat.

Thanks Teri! It was a pretty great present :)